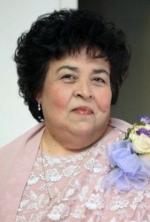 Visitation was from 9 a.m. to 8 p.m. Tuesday at Miller Funeral Home. A rosary will be recited at 6:30 p.m. Wednesday at the funeral home. A funeral service for Maria will be held at 10 a.m. Thursday at Our Lady of Guadalupe Catholic Church with Father Raj Arokiasamy officiating. Interment will follow at Snyder Cemetery.

Maria was born Oct. 31, 1946, in Tecoman Colima, Mexico to Prudenciano Guerrero and Rafaela Ramirez. As a young girl in Mexico, Maria attended the Academia Comercial Valencia and received her certificate as a secretary of stenography. Moving into her adulthood she married Mr. Pedro González on April 29, 1972 in Colima, Mexico.

Maria was a lifelong active member of Our Lady of Guadalupe Church. Faithful servant of God, wife, mother, grandmother and loving friend to all. A devout Roman Catholic, she was a Guadalupana serving as president for many years where she provided leadership in social concerns and performed numerous works of charity. She is known for her natural cooking talent which she enjoyed sharing in support of church functions and celebrations. Maria was a Cursillista who loved to give “Rollos” talks that help people get closer to God and their faith. Maria was also a member of the Ladies’ Auxiliary of the Knights of Columbus where she assisted the Knights of Columbus in raising funds for the Church as well as for deserving charities. At Our Lady of Guadalupe Catholic Church, she served as a Eucharistic Minister and a lector. During her ministry she reached out and touched the hearts of many people within the Diocese of Lubbock.

Maria enjoyed cooking, supporting her grandchildren’s activities and spending time with her friends. She enjoyed singing and sang in the church choir and loved to perform mariachi songs during Cinco de Mayo and September 16 celebrations.

Maria was preceded in death by her parents; her six brothers, Miguel, Marcelino, Leopoldo, Lorenzo, Agipito and Tobias; and her four sisters, Elena, Eloisa, Josephina and Mercedes.

A celebration of Life will be held at a later date.

Arrangements are under the direction of Bell-Cypert Seale Funeral Home.