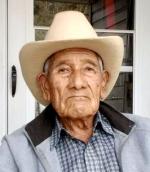 Richard Arendondo Ruiz, 96, died Wednesday, Oct. 7, 2020, in Snyder, surrounded by loved ones.
A rosary will be recited at 6:30 p.m. Sunday at Miller Family Funeral Home Chapel.
Services for Mr. Ruiz will be held at 10 a.m. Tuesday at Our Lady of Guadalupe Catholic Church. Burial will follow at 2 p.m. at the Texas State Veterans Cemetery in Abilene.

Mr. Ruiz was a World War II Navy veteran. He served in the Navy from 1942 to 1945. During his service he was frogman, working in underwater demolition. He was a Third-Class Petty Officer, and a gunner's mate. He was a member of the American Legion, Veterans of Foreign Wars, Knights of Columbus, American GI Forum and Our Lady of Guadalupe Catholic Church. He like to travel and see different places. He enjoyed fiestas. 16th September, Cinco de Mayo and Fourth of July were some of his favorites. His wife Alicia liked to sit on the bench at United Supermarket to pass the time and say hello to all their friends. He was well-known in Snyder by friends and compadres. He was a very proud man and proud of his children and grandchildren.

Online condolences may be expressed to the family by visiting www.millerfamilyfuneralhome.com .

Services for  Ms. Joyce  Widner will be held at 2 p.m. Tuesday at Bell-Cypert-Seale Chapel with Hospice Chaplain Kinney Robinson officiating. Internment will be at 2 p.m. Wednesday at Lovington Cemetery with Matt Thackerson officiating. Visitation will be held from 6 to 7 p.m. Monday, Oct. 12, 2020, at the funeral home.

Ms. Widner was born Tuesday, Dec. 14, 1948, in Snyder to Gilbert Ismael Widner and Edna Earl Dunn. She was a the loving caregiver for Stacy Browning of Snyder for more than 20 years. She was a member of First Baptist Church.

She was a loving mother and caring grandmother to her family. She never met anyone that she didn't like and she never turned down a cup of coffee. She was known as the holder of secrets. She loved to keep her grandkids laughing.

She was preceded in death by her sister, Sue Rhodes; her brothers, Clinton and Wayne Widner; and by a grandchild, Leah Clayton.

Survivors include her two sons, Bennie Bohannon and his wife, Dee Dee, of Lovington, N.M., and Brian Bohannon and his wife, Sandi, of Lubbock; her two daughters, Sheila Garcia and her husband, Ronny, of Snyder and Sherry Maples and her husband, Geoff, of New Market, Tenn.; her brother-in-law, Cecil Rhodes of Lovington, N.M.; her aunt, Marie Mosman of Brownwood; 16 grandchildren; and 17 great-grandchildren.

Online condolences may be posted at  www.bellcypertseale.com .